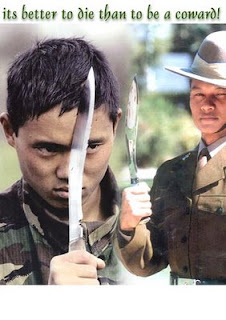 The decision of the Government to severely limit the number of former Gurkha's who qualify to live in the UK shows that this Government is not only financially bankrupt but morally bankrupt as well. Those who have served this country so faithfully, at times with greater loyalty and commitment than some of its own citizens, deserve to be treated with the respect that their service has earned them.
Regretably, however, for this Government, the treatment of our armed services and the families of service personnel has never been a high priority. Indeed it is clear that the covenant between society and those who defend that society has been broken. Those who commit troops to war have a responsibility to ensure that they have the most appropriate equipment and support, that their families are cared for, that families are treated as equals in society and that those who leave the service are supported in adjusting to civilian life, including resettlement.

The Government has failed on so many fronts in this regard, yet even where they have tried to rectify the situation with the Service Personnel Command Paper we still find that here in Northern Ireland Sinn Fein are blocking its implementation. They are not the first to deny the rights of military personnel and they won't be the last but somehow the moral responsibility of a nation to its' troops must be met.
http://home.clara.net/stevebrown/html/expeience_of_war/kipling_tommy.htm
Posted by Stephen Nicholl at 08:32 2 comments:

A billion here, a billion there, pretty soon it adds up to real money.
Senator Everett Dirksen (1896 - 1969)
Once upon a time I managed an organisation which provided advice services, of which money advice was a significant element. When someone came to us for help, usually because they were close to despair, we reviewed their outgoings and their incoming finances and sought to achieve some form of balance. This usually meant reducing their spending and maximising their income until their debt was clear. We always warned about the long term consequences of borrowing more to fix short term problems.
Spending our way out of a recession is an economic theory above my pay grade but then I have difficulty working out how much of the debt we are taking on is spendable new money. After all isn't much of the debt to cover the losses by the banks and the remainder to cover the Governments costs in running services because of a reduced tax take. So, if spending our way out of the recession is the theory then we are only using a small percentage of the loans we are taking out to do that.
Apparently we are to find £15 billion in efficiency savings over the next few years. Any Government that was inefficient to the tune of £15 billion shouldn't be in power anyway, but is it not time that we told people the truth, we cannot do everything we want to with the money we have and some things have to be prioritised.
The biggest political challenge we now face is finding politicians who will tell people the truth on water rates, the regional rate and the limits on service delivery.
People have to live within their means, so do Governments.
Posted by Stephen Nicholl at 22:35 2 comments:

It was never my intention when creating this blog that it should be used as a commentary on reality television. A few days in existence and that status has changed.

The current series of Sir Alan Sugar's The Apprentice has been aired now for a few weeks and features a candidate from Northern Ireland called Ben Clarke, who seems to lack either a good razor or a decent beard but has arrogance to burn. In a recent episode the contestants were asked to invent a new piece of exercise equipment for the home, Ben suggested a new sex toy. Which is why it has come as some surprise to hear that Ben has become a pin up and role model for the DUP. Trevor Clarke MLA, who is no relation to Ben, has stated in a press release "Ben offers an example to us all". If we accept that a considerable number of DUP followers do not equate fitness with sex toys there must be another reason why he is held in such high esteem.

One has only to look at the comments of Paula Jones, the contestant fired on the latest episode, to see what Ben has to offer as a DUP role model.
"Ben became completely unnecessarily aggressive towards me. I think he took it personally that I took him into the boardroom. He accepted no responsibility whatsoever and just behaved like a child, like a bully. He's very, very opinionated about everybody he comes into contact with and if you're going to behave in that way you've got to be pretty slick yourself and he just isn't. The lad's a no-mark. And it won't surprise me if he gets fired fairly soon, because nobody likes a bully."
Ben's personal attributes make him a perfect role model for the DUP. Indeed were his name Robinson, Dodds or McCrea then his career would already be mapped out for him. So perhaps a piece of advice for young Ben, if you want to earn £250,000 a year with a penthouse in London, a home in Belfast and a villa in Florida don't change your job, change your name. You already have everything else you need.
Posted by Stephen Nicholl at 06:53 2 comments:

"A little concern" the phrase used by a DUP insider to describe current preparations for the forthcoming European election. The normally unflappable DUP appear to be concerned at how they are being received across the country. Having had difficulty in persuading anyone to consider running for the position (apart from a few Councillors and rumour has it one MLA who saw the writing on the wall for his selection chances next time round) the DUP selected a big name. Unfortunately having the name is not the same as having the profile. Confident that the Shankill Road Councillor would appeal to the rest of the province the campaign, under the direction of a junior minister no less, started with each MLA ordered to take the Shankill Councillor for a day and "get her known". This process has been supplemented with a series of roadshows where the candidate, accompanied by senior party figures, gets to answer questions from the, generally speaking, party faithful. Not only have these events not been as successful as anticipated, the Shankill Councillor has failed to shine. Indeed her party colleagues have answered so many questions for her the faithful are doubting whether she could deliver anything in Europe. Indeed things have got so bad that the normally reliable rural DUP voter is looking at his milk cheque and wondering who will improve his income. They are choosing either of the two Jim's as they at least have an understanding of the issues affecting farmers. A radical shift in DUP strategy is apparently on the cards with the Shankill Councillor being sent back to the city to get out the normally euro-reticent urban voter. All of this has consequences for the campaign director, who has not yet earned the trust of the faithful, and the party leader who appointed him. The whispering campaign has already started against Robbo and a poor result followed swiftly by the devolution of policing and justice will see the DUP enter a Westminster campaign with serious questions about the leadership and direction of the party.
Posted by Stephen Nicholl at 11:36 No comments:

The outrage expressed by the Rev William McCrea over comments made by Barbra DeBrun at Easter is not really surprising. What is surprising is that the Rev McCrea seeks to differentiate between Ms Brown and the rest of the Republican leadership. Surely even William can see that her views are the views of republicans, full stop. Those with whom William shares power take no other view than that expressed. William fears that should Ms Brown be elected top of the forthcoming European election this message will be released across the world. Yet he fails to note the globetrotting peacemaking gurus from Stormont who have spread their message worldwide. When Martin talks to the political representatives of the people of Iraq does he say anything different than Ms Brown, William should know since his party colleague Jeffrey Donaldson is frequently part of the peace selling team. When Martin and Peter talk to Presidents and Princes does Martin denounce the Provisonal movement, does Peter? William had a chance to take a stand on principle. He chose not to. The republican movement speaks with one voice and no matter what that voice says William will stand shoulder to shoulder with it in the partnership he and his colleagues have created.
Posted by Stephen Nicholl at 03:46 No comments:

"When, O Catiline, do you mean to cease abusing our patience? How long is that madness of yours still to mock us? When is there to be an end of that unbridled audacity of yours, swaggering about as it does now? Do not the nightly guards placed on the Palatine Hill--do not the watches posted throughout the city--does not the alarm of the people, and the union of all good men--does not the precaution taken of assembling the senate in this most defensible place--do not the looks and countenances of this venerable body here present, have any effect upon you? Do you not feel that your plans are detected? Do you not see that your conspiracy is already arrested and rendered powerless by the knowledge which every one here possesses of it? What is there that you did last night, what the night before-- where is it that you were--who was there that you summoned to meet you--what design was there which was adopted by you, with which you think that any one of us is unacquainted?"
Posted by Stephen Nicholl at 10:44 No comments:

"Longing not so much to change things as to overturn them." Cicero
Posted by Stephen Nicholl at 09:32 1 comment: