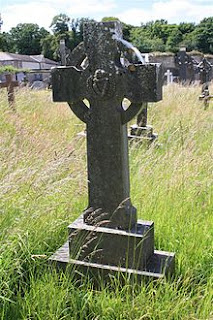 The Irish Government’s programme of events to commemorate the Easter Rising is being defined by the actions of Sinn Fein. In fear of being found on the “wrong” side of the Republican movement the Government has abandoned all thought of rational analysis of the events of 100 years ago and instead opted for the Sinn Fein narrative.
The decision to offer the family of Thomas Kent a full state funeral for the removal of his remains from Cork prison and re-committal in a family plot in Castlelyons is an example of the Irish Governments decision to re-write history to a Sinn Fein script.
Thomas Kent was sentenced to death and executed for the murder of Head Constable William Rowe RIC who had been sent to the Kent home to arrest suspects after the start of the Easter Rising.
William Rowe left behind a widow and five children. What is missing in the Irish Governments narrative is the fact that William Rowe was also an Irishman going about his lawful duty as a Constable. What makes Thomas Kent any more worthy of a state funeral than William Rowe or any of the 10’s of thousands of Irishmen who fought and died on battlefields such as the Somme or Gallipoli. The truth is he isn’t unless this act is part of the re-writing of Ireland’s historical narrative.
While politicians in the Republic clamber to be associated with acts of violence or the perpetrators of past terrorist activities such as O’Donovan Rossa on the basis there are no local implications things will become more difficult over the next few years.


The anniversaries of events during the Irish Civil War will be more difficult to re-write into a narrative which shows Ireland standing alone, united against the Brits. There will be many William Rowe’s who served Ireland in different uniforms and who deserve to be remembered despite Sinn Fein’s narrative.
Posted by Stephen Nicholl at 08:29 No comments: