Shortly after the General Election I penned a few thoughts on the cemtral theme of the local contest. Since the issue has come to the fore again in the UUP leadership race I thought I would share my views of a few months ago before posting my current thoughts.

Unionist unity was at the forefront of a number of campaigns during this election and will no doubt be raised as an issue in advance of the forthcoming assembly elections. This throws up a number of questions, what is meant by unity and, in the context of what has been the attitude of the parties in this election, what now is the definition of UK unionism and what is our role within it?
From a position at Hatfield of seeking a form of pan-unionism involving the Conservatives and Ulster Unionists the DUP moved quickly to undermine the Conservative and Unionist project once it became clear they could not meet the terms of joining such a movement. Their focus on unity as defined by William McCrea is that there should only be one unionist party. Whether that should be the DUP on its own or the creation of a new unionist political party both options will require the final demise of Ulster Unionism
Alternatively a desire for unity based simply on short term political expediency and the delivery of a number of seats whether at Westminster or Stormont can only truly deliver in rare circumstances. While the agreement of all three parties to step aside in Fermanagh and South Tyrone was rightly based on the desire to end the misrepresentation of the constituency by Sinn Fein, the DUP sought to use that agreement to undermine the Conservative and Unionist project in other areas. Their desire to have candidates from the Conservatives and Unionists step aside in favour of unaligned independents in other areas such as South Belfast was motivated not by the interests of the electorate but by their own ruthless need to prevent any candidates raising their profile who would later pose a threat to DUP elected members. Any proposal in future which has at its heart the exclusion of the best new talent that unionism can offer cannot be considered.
The choice for Ulster Unionism in the next few days seems clear, to forsake the ideology of pan-UK unionism and greater involvement in UK politics and seek short term political representation based on subservience to a party that has demonstrated that its new attitude to the union is based on the two words most feared by true unionists namely “ourselves alone” or continue the path already chosen in the interests of the union. The greatest threat to the union is not that Nationalism will drag us kicking and screaming into a united Ireland but that we by our carelessness and petulance turn our back on the thing we hold most dear.
Of course things can always change, after all the DUP have over the past number of years specialised in ruthlessly attacking the UUP for any policy initiative we have taken only to immediately adopt such a position once they have gained electoral advantage. This time they have been quick off the mark even for them. The DUP having spent the past 6 weeks attacking the very idea of pan-UK unionism as weakening Northern Ireland’s position and themselves becoming the embodiment of Ulster Nationalism have taken yet another new position. Jeffrey Donaldson speaking only two days after the election has said in Liverpool,

“As we struggle to recover from the impact of recession, we are stronger together than we would ever be apart. Yet despite the strength that comes from unity, there are nationalist elements that seek to dismember the Kingdom and destroy the Union. Surely the time has come for unionists to come together to mount a strong defence of the Union. We must not allow nationalism or indeed extremism to hold the stage on this debate.
The case for the Union is a powerful one but it is often unspoken. I advocate the creation of a UK - wide movement that will draw together political and civic unionism in a campaign to promote the maintenance of the Union and to defend the integrity of the United Kingdom.”

It is clear that it is not the policy that the DUP have issues with rather it is that Ulster Unionists moved the debate forward without them. Therein lies the issue for Ulster Unionism, can it ever totally trust a party who will at every opportunity seek to undermine and remove it from the political map at whatever cost to the union and unionism? Also can pan-UK unionism ever be promoted without the support of the one party capable of delivering it?
Posted by Stephen Nicholl at 11:35 2 comments: 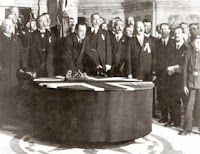 During the Ulster Unionist leadership campaign the term traditional unionist has been derided as something to be avoided as uncouth, rural and not politically correct.

But should we deride the term, after all what are the attributes of a traditional unionist.
Loyal to Queen and country – absolutely and importantly being aware that without playing a more positive and active role in the United Kingdom unionism risks degenerating into a form of Ulster Nationalism.

Resolute – from the formation of the state traditional unionists have stood firm in face of hardship, in war, against terrorism and in difficult economic times.

Compassionate – they have a love of their fellow man and seek to serve their community through voluntary action and endeavour.

Political leaders – they built Northern Ireland up and stood against the terrorists who would tear it down. They recognise that our society is not yet all that it can be. It is traditional unionism that will focus our political effort to drive out poverty and deprivation.

For Ulster Unionism the challenge will be to show that we are the best placed party to take Northern Ireland forward. It will not be enough to simply ask for the electorates support to keep the other parties out, instead we must show how, by electing Ulster Unionists, problems will be solved and for individuals their quality of life will be improved.

We live in a society where there are children who go to bed hungry because they live in poverty.

There are 11 year old children who have started their post primary education without the numeracy and literacy skills to learn in that environment.

There are 16 year olds who left school in June with no qualifications, no route to further and higher education, no training opportunities, no jobs and no hope.

Finding employment for anyone in good times is difficult enough, now it seems an impossible task.

50000 people are on waiting lists for housing.

As heating costs rise there are families who must make the choice between heating and eating.

As we grow older the demands on our health service grow greater.

If we are to deliver for the people of Northern Ireland then these are the issues that we must address.

The choices we have will be difficult and those who take them must be prepared to stand over them.

But be of no doubt the leadership that is required both for Ulster Unionism and for Northern Ireland will require that those decisions have to be taken.

That means becoming a party fit for purpose, a party whose objective is a better life for all, a party of ideas, a party of delivery.

We should not allow ourselves to be ring fenced by the dogmatic approaches of others or distracted by the blue skies of Utopia but we should set ourselves the goal of providing the leadership our country needs across all areas of government not just those we control.

I believe Tom Elliot has the skills our party and our country now need and by supporting him I believe that Ulster Unionism can begin to return to a position of leadership not just by the strength of our words or the attractiveness of our ideas but by the resolute nature of our actions.
Posted by Stephen Nicholl at 11:34 1 comment:

At the launch of his leadership bid today(though to be honest everyone has been aware that he has been campaigning for the job since before the Westminster campaign) Basil McCrea outlined his five pledges to the membership.

The first promises that, should he become leader, McCrea will not take a ministerial portfolio, instead devoting all his energies to rebuilding the UUP.I actually like this one as the task in re-building the party at this stage is probably a full-time job and I certainly would like to see Tom Elliot make the same commitment.

The second vows to make education the first choice ministry for the UUP. Bit of a no brainer this one as every party will want to say the same thing during the election campaign. The challenge will be to outline what we will do with it once we have it. Given that Basil is the education spokesperson a lack of clear direction is of concern and is something that Basil will have to address in the next few weeks.

Third Basil pledges not to form electoral pacts. A very sweeping statement which leaves no room for manoeuvre and given the long term discussions needed to address the issue of voluntary coalitions in the future very short-sighted.
His fourth pledge is a strange one. Every MLA to have a vote of confidence from the entire party every year. To what end? What will be the consequences of losing such a vote? Resignation? How will those from differing parts of the country make an assessment of the value and contribution of an MLA from another constituency? Of course one could always take a cynical view of the proposal. Should Basil win the leadership the threat of a no confidence vote would act as an incentive for MLA's to toe his line. Anyone raising their head above the parapet can be removed. And thus a dynasty was born!

Lastly he pledges to compel elected representatives to attend executive meetings. Of course, given item four above, Basil will hope that none of the MLA's would dare raise their voice against him and having them at the executive will help with control of the party. This of course is strengthened by his decision to remove the entire officer team. It is unclear at this stage if he intends to replace them and if so how. Following the party rule changes the officer team is elected by the members and to change the rules Basil would require a 2/3rds majority of the party membership.

All in all Basil has based much of his campaign on seeking to remove what he calls the "cabal". His five pledges suggest that he wants to replace the "cabal" with a cult.
Posted by Stephen Nicholl at 10:51 No comments:

The blogging sabbatical is over and with the best intentions in the world I'll be commenting on issues that take my fancy on a regular basis.
Posted by Stephen Nicholl at 03:16 No comments: